I spent a weekend in July 2015 researching the places and histories of Imperial County, CA – and felt like I was touring the area from my armchair. Thanks to videos documenting the unusual sites of the county, and online maps, blog posts, and Wikipedia, I was able to piece together a picture of this far-southern county in the Sonoran Desert.

There are sand dunes, stalwart individualists, farmers, and date palms, plus over 100 years of history since pioneers settled these hot desert towns. Before that, several tribes occupied the area.

First People: The Kumeyaays (Those Who Face the Water From a Cliff) and, near the Colorado River, the Mojave (People of the River).

Brawley – J.H. Braly refused to sign a document to permit the use of his name for this town, so the townspeople kindly changed the name to Brawley and the first post office was established there in 1903. Five years later it was a booming tent city of about 100 people when it was incorporated. As of 2010, there were 24,953 citizens in Brawley. It is home to the annual Cattle Call Rodeo and an octagonal post office. Brawley is 13 miles north of El Centro. 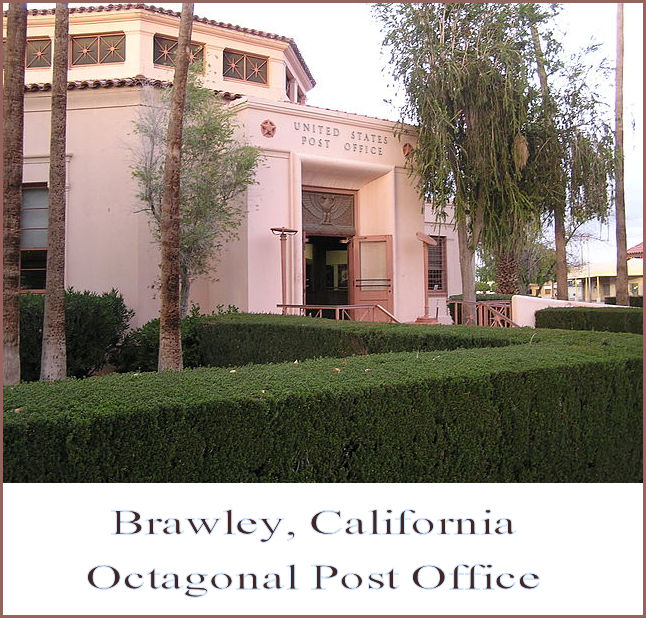 Calexico is a border town connecting us with Mexicali. It hosts a Mariachi festival on March 25 every year. There were 38,572 people living there in 2010. The Imperial Land Company founded Calexico in 1899 as a tent city. The first post office opened in 1902 and the city was incorporated in 1908. The name, Calexico, is derived from a combination of California and Mexico, just as its sister city to the south is named Mexicali as a combination of Mexico and California. Clever, indeed.

Calipatria – In 2010 there were 7,710 people living in Calipatria. That number includes 4000 inmates at the Calipatria State Prison, a place noted for overcrowding, gangs, excess stress, and an ever-present scent of cow manure wafting in from nearby pastures. An unpleasant environment and rowdy neighbors surely causes distress for the men housed there. There’s one bright attraction near Calipatria – and it is called… Salvation Mountain. It is an artistic creation by Leonard Knight. 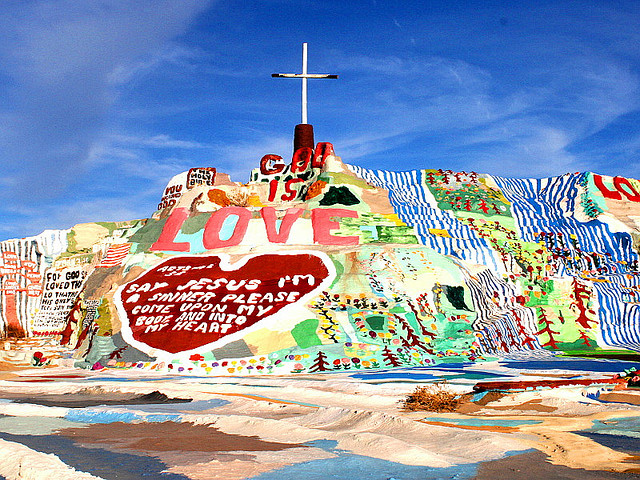 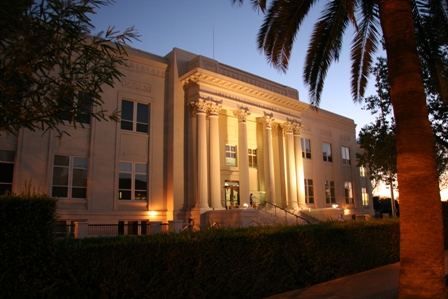 The courthouse for Imperial County, CA is in El Centro.

El Centro – The year was 1906. W.F. Holt and C.A. Barker bought a barley field and within five months turned it into a city. El Centro was incorporated on April 16, 1908. By 1920, 5,646 people lived in El Centro. In 2010, the census workers counted 42,598 residents. El Centro was chosen as county seat over Imperial, the city that expected the honor. El Centro is the largest US city below sea level; all of fifty feet below. The record high in El Centro during the month of July, is 122 degrees. The average is only 107 degrees.

Mixed reviews for this
recent Imperial County
rambling narrative of
over 1200 pages.

Holtville – You will be happy to know that Holtville is the Carrot Capital of the World. All those carrots you’ve been eating – possibly could be coming from Imperial County near the town of Holtville. The town’s name used to be Holton. It was founded in 1903 by W.F. Holt, and incorporated five years later on June 20, 1908. Unfortunately, postal service workers got confused as Holton rhymed with Colton. They asked Holton to change the name, so the city fathers agreed on Holtville. The town is on the banks of the Alamo River – a river formed accidentally when canals caused flooding from the Colorado River that lasted two years. The flooding formed the New River, Alamo River, and Salton Sea. 5,939 people lived in Holtville during the 2010 census. 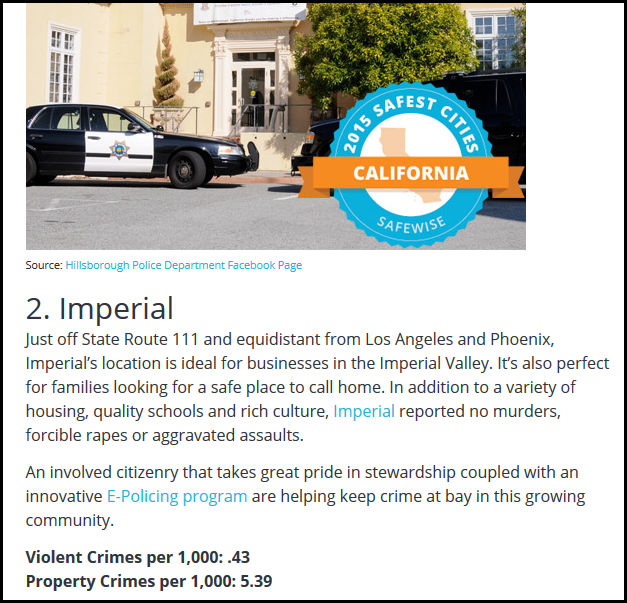 Westmorland – This little city was incorporated in 1934. There were only 2,225 people there in 2010, so there are a lot less people than in unincorporated Heber, 29 miles south. Westmorland has an annual Honey Festival on the third Saturday each November. There are a lot of bee keepers in the area.

Bombay Beach – This town is the lowest community in the USA, at 223 feet below sea level. In 2010 there were 295 people living there. Bombay Beach is at the southern end of the San Andreas Fault. Part of the town was buried in mud due to the Salton Sea’s fluctuating water level. Because the nearest gas station is 20 miles away in Niland, many residents of Bombay Beach use golf carts to travel around town. There are photos of abandoned places in Bombay Beach on Abandoned USA.

Desert Shores – This little community of 1,104 people (Census 2010) is on the western shore of the Salton Sea, north of Salton City, and just south of the Riverside County border. I took a look with Google Maps, and saw a lot of trailers there, with people living in them. Desert Shores was once called Fish Springs. Maybe that was before the fish in the lake started to die. Not to give the wrong impression… there are still fish living in the lake. One video I watched said there are about a million Tilapia there, and I saw ducks swimming on the lake – so it isn’t like this is a totally dead and forlorn place. No, far from it. The lake is lovely. People still use it for boating activities.

Heber – There were 4,275 people living in the neighborhoods of Heber in 2010. It is a community just 4.5 miles north of Calexico, which is at the Mexican border. This census designated place has only 1.5 square mile of land. The houses are close together. Maybe this will be Imperial County’s next incorporated city. It seems there’s plenty of people.

Niland – With a population of 1006 for Census 2010, Niland is one of the larger small towns in Imperial County. This place was called Old Beach when the first post office opened in 1905. That post office closed two years later, but in 1910 another post office opened with the name, Imperial Junction. The town changed its name to Hobgood in 1913 after pioneer Richard H. Hobgood. There was yet another name change, to Niland, in 1914. Enough name changes already! The name Niland stuck. It means “Nile Land” referring to the fertility of the area similar to the land near the Nile in Egypt. Nearby you’ll find Slab City, a place famous for squatters who want to live without laws. They call it “the last free place in America.”

Ocotillo – Ocotillo is a small town in the southwest corner of Imperial County. Ocotillo is also the name of a flowering cactus also known as fouquieria splendens. This town started as a retirement community, and as of 2010 had 266 residents.

Palo Verde – This is a tiny town of 171 people (Census, 2010) in the northeast corner of Imperial County. The original Mojave name for this area is Hanyomalivah. The name “Palo Verde” means “green stick” in Spanish, and it is also the name of a tree. Ripley, a town in Riverside County, is only ten miles away; Palo Verde is on the border of the two counties.

Salton Sea Beach – This is a thriving community of about 400 people on the Salton Sea’s western shore, north of Salton City. The people living here seem to love the beauty of the lake, despite its high salinity, fish die-offs, and bad reputation. Like at most towns, you can film and photograph the oldest derelict buildings and dead animals, or you can turn your camera to new development and happy people. Your choice.

The Enigma of the Salton Sea

Salton City – Here you can find the tragic remains of a beach resort community on the western shore of the Salton Sea, that thrived in the 1950’s and 1960’s – until the fish started dying in the 1970’s. Today the tourist areas are almost completely abandoned, but many people still call this their home. In 2010, the US Census counted 3,763 as Salton City residents. It is significant to note that in 2000 there were only 978 people there, so the population has nearly quadrupled due to low real estate prices. In 2015, as I write this, there are several Salton City lots for sale for less than 3000 dollars.

Seeley – one of the oldest communities in the county, named for Henry Seeley, an early Imperial County pioneer and developer. In 1910 the census counted 1,739 in Seeley. The town is below sea-level and directly on top of the Imperial Fault. Great location for a stage stop-turned-town.

Winterhaven – is right next to Bard in the southeast corner of California. Farming is the main occupation. Winterhave is the site of what’s left of the plank road that helped visitors reach San Diego, despite sand dunes.

Bard – a very rural farming community in the far south-east corner of California. It is desolate, remote, and mainly occupied by crops, including date palm trees.

Glamis – home of the Imperial Sand Dunes, which are left over by ancient (dried up) Lake Cahuilla. The dunes are an amazing vast and arid wasteland of sand – and these days, used by off-highway vehicles for recreational purposes.

Plaster City – home of the last working industrial narrow-gauge railroad, which transports gypsum from the quarry to the United States Gypsum plant. There’s an open area for off-highway vehicles nearby.

Gone But Not Forgotten – The Ghost Towns

Bradtmoore – A long-gone community half a mile north of Heber. The community’s founder was Bradley T. Moore. A post office opened here in 1903, but it was moved to Heber a year later.

Frink – There doesn’t seem to be much there. It is near Bombay Beach.

Silsbee was on the shore of Blue Lake. Mr. Silsbee wanted to create a resort town, but that ended when the lake suddenly disappeared. This happened because of a canal disaster. Yes, people were messing with nature.

The California Development Corporation built a canal from the Colorado River to irrigate farmland in the area south of what we now know as the Salton Sea. Unfortunately, the canal became clogged in 1904, and they built a second canal. Same results, and a third canal was needed. These were very persistent agricultural development people! 1905 was an El Nino year, and due to heavy rains, the Colorado River flooded. The waters were so high, they overflowed the river bank and raced through the three canals – eventually ending up in a huge inland desert puddle we now know as the Salton Sea.

For months, the entire course of the Colorado River was diverted into the desert. This wasn’t resolved until 1907 when 3000 train cars full of boulders put the Colorado back in its place. Anyhow, by the time this was over, Blue Lake and Silsbee were no more. That site is now occupied by a farm, but there’s a historical marker on Silsbee Road.

Hi, I'm Linda Jo Martin. I was a life-long Californian . . .until I moved to Northern Idaho in 2013. I'm hoping to go back for a tour next year.

My first novel is historical fiction about a girl who lived in California in the 1920s: River Girl.

By continuing to use the site, you agree to the use of cookies. more information